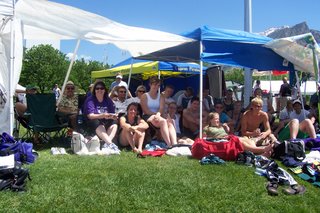 i thought you guys might like to know how the state track meet went this weekend. I ran the 100 meter Hurdles, made finals, and got 6th place out of 9, and got a medal. i also ran the 300 meter hurdles, but i barely missed finals...oh well. it was a good weekend, and a good way to end my senior track season. Suzy on the other hand, had a bad weekend. she threw Shotput and Discus. when she was throwing the Shotput, she threw her personal best, but the judge measured the wrong mark. (they measure the dent the shot leaves in the sand) Suzy told him that the dent wasn't her mark, and the one above it was hers, and the girls on the bench told the judge that he was wrong, but he judge said "i'll mark what i think is your throw." so Suzy got 7th instead of 4th!!!! evil judge. She's ok. she's mad, but knows that she still has next year. here's a picture of "Tent City." enjoy your week!
Posted by Sarah at 9:46 PM

SATURDAY WAS AWESOME, great race, good fun & many memories. It was nice to get home though, out of the sun and drink some Caffeine!

Congratulations Sarah!!!!
Three of my siblings ran in their last meet on Saturday too. They all did very well. My bro Joe got fist in "high jump" so that was exciting.

Tell Suzy that I'm sorry about what happened. It stinks when judges are to proud to admit that they made a mistake, and then they act like they ment to do that all along.

You have a great week too!

Woo! Good job Sarah! i love you!! You have to give me your invite for your grad soon...

tag, you're it, go to claire's blog to find out why!

Sarah
"I am finding everything I'll ever need. By giving up, I'm gaining everything. Falling for You for eternity. Right here at your feet is where I want to be. I am Yours."--DC*B I am enjoying life with God and the people He has blessed me with!