a twister, a twister!

What a rush! The first two days here in CO have been great (and i'll fill you in later), but let me tell you about the big news that has happend so far. Today, it was raining cats and dogs, which was strange because yesterday it was stinkin hot! Anyway, a tornado, that's right TORNADO, probably 20 miles from us in Windsor touched down and did what tornados do best. There was also golf ball sized hail that was coming down hard enough to go through walls! About 6 tornados touched down, but the biggest one was an F3, (an F5 is the largest), and about ONE MILE across! Wow! For being that big, the damages was not as bad as I thought it would be. It was still bad though, because there was one fatality. There was a guy in a semi truck and when the tornado came around it picked him up and dropped him back down.
I was a little scared because tornados are not very predictable and we could have been in trouble! Ft. Collins did not get close to any tornados though (thank goodness!), but the sky was still dark. Here are some pics of the sky. 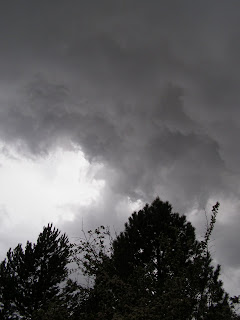 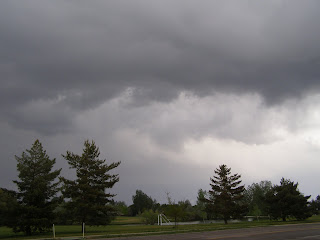 Hopefully that is my only encounter with a tornado (it would be cool to see one though), and I am extremely glad that we are safe!
More to come!
Posted by Sarah at 11:47 PM

We are extremely glad you and the ratzlaffs are safe.
Can you see Long's Peak from the house if so, please take an awesome photo of it for me...i want to hike it before i die!

Sarah
"I am finding everything I'll ever need. By giving up, I'm gaining everything. Falling for You for eternity. Right here at your feet is where I want to be. I am Yours."--DC*B I am enjoying life with God and the people He has blessed me with!